You are here: Home / My Life / Family / How I Turned My Cartoon Junkie Into A Bookworm

Happy Friday! I hope y’all have had a great week! There’s been some crazy site issues going on over here, but hopefully everything is up and running better than ever now. 🙂 I’m really excited to share with you the story of how Ridley changed from being into cartoons and begging to watch PBS shows on Netflix to begging to have books read to him. 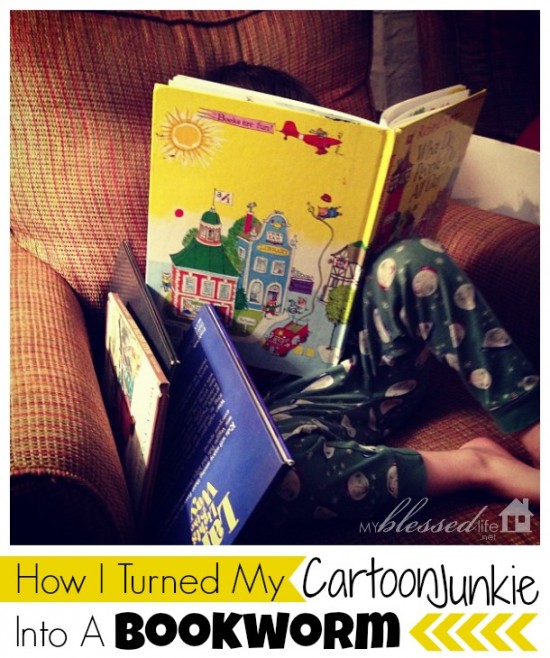 A year ago, I had a new baby and was in survival mode. I hadn’t found my motherhood mojo yet and I was really struggling to keep my head above water. Meaning…I was trying to stay sane.

As a result of trying not to go to the crazy house, I let Ridley fall into a bad habit of watching too much Netflix. The shows weren’t bad or anything {Blue’s Clues, Thomas The Tank, Kipper and the like}, but it was just wayyyyyyy too much screentime for him.

I started feeling really convicted as a result of my sister’s faithful example of reading to her kids. She has three littles {soon to be four!} and the kids LOVE to read because she reads to them all the time.

But I wasn’t ready to change until one day, Ridley said to me, “I don’t like to read.”

What?! Those words stung. A lot. Not only because I knew I had failed in providing a very important part of my child’s development, but also because I have always loved to read. My dad calls himself and his offspring “bookmongers.”

{Nerd alert – I read World Book Encyclopedias and the dictionary when I was a child and early teenager. I just devoured everything I could find to read.}

So, I couldn’t imagine anyone saying, “I don’t like to read.”

I firmly believe that knowledge is power in every realm of life. Reading {and loving to read} is an integral part of gaining knowledge.

I knew something had to change. 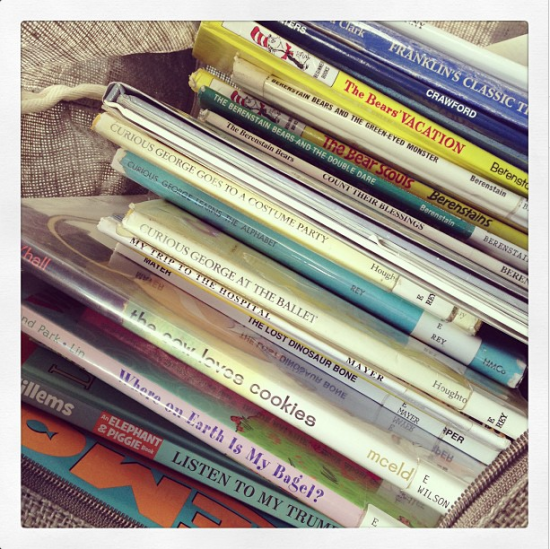 First of all, I had to change.

It’s a sacrifice of my time and energy to read to my child. It didn’t start out as “fun” for me because I was thinking about the ten million other things I needed to be doing. But, I can honestly say that I really love reading to my boys now. It brings me a lot of real, satisfying joy. And I do it without guilt.

Then, Ridley’s desires had to change.

To achieve this change, we did some drastic things.

1. We put away the laptop that he watched Netflix on. Out of sight is out of mind. Boom.

2. I downloaded audio books onto my iPad. {This has been a huge source of fun for our whole family.}

3. We set aside reading time every day. Both reading aloud and reading silently. And Ridley always gets a bedtime story read to him by his daddy. 🙂

4. I signed Ridley up for the library reading program. Last Summer he met his goal of 1000 pages. This Summer he’s more than 3/4 of the way to his reading goal of 200 books!

I think the librarians sigh when we come to check out more books because the pile is so huge. Ha!

Since we’ve been reading so much more, listening to audiobooks and more imaginative recordings, I’ve noticed Ridley’s imagination has soared. It truly amazes me and I’m just so thankful that we made the change from cartoon junkie to bookworm.

Ridley’s love of reading will benefit him not only as a child, but it is training him now to crave knowledge that will empower him for life. 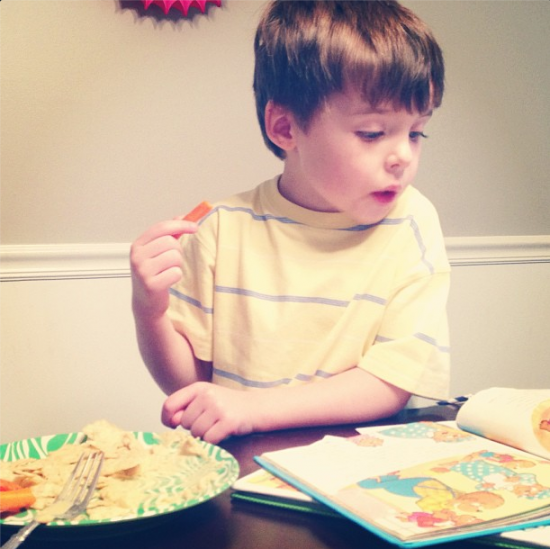 Silly boy! Now he loves to read during meals just like I did as a kid.

Besides checking out books from the library, I love scouring thrift stores, rummage sales and yard sales. Our personal library is growing by leaps and bounds and we’ve hardly spent much at all.

I just want to encourage you to turn off the tv and take the time to read to your children or grandchildren.

It really is an investment in their future.

Tell me! Do your kids love to read? If they don’t right now, be encouraged that you can help them learn to love it! 🙂