You are here: Home / Uncategorized / I’m Digging Out…From The Tornadoes

Wow.  What a time we’ve had in the last few days.  As you probably know the South was pummeled with tornadoes last Wednesday, April 27th.   This day will go down in history.  Alabama was devastated. 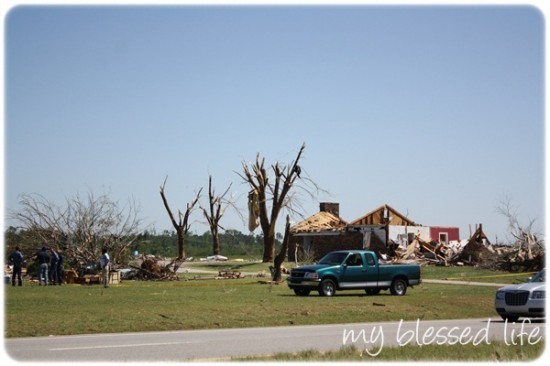 We woke up at 4 AM with sirens going off, so we headed to the church {our shelter}. Then my hubs was off to work for the day. All day long Ridley and I were back and forth between home and the church.  All day long the sirens were going off.  Tornadoes went barely south of us and barely north of us.  At one point one was on the ground headed straight for the center of our town {where the church is} and all of a sudden it veered north. April 27, 2011 was the most nerve wracking day of my life.  I just wanted it all to be over.

Around 4 PM the worst storm came through.  We could see it coming…the ominous, dark clouds.  Then debris began falling from the sky.  Sheets of 4×8 plywood fell, mangled sheets of metal, pieces of grave flowers, newly shredded wood from homes.  Our vehicles were covered in “garbage.” 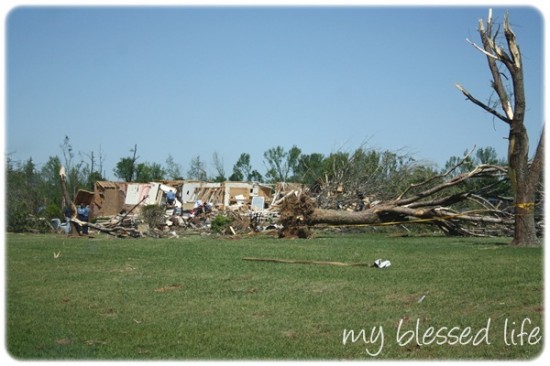 At that point, I knew that it was going north of where we were located.  Directly toward my husband’s workplace.

The power went out because the tornado hit major power lines.  Cell phone service went out.  I’ve never prayed so hard in my life.

After a couple of very fearful hours I was able to get in touch with my husband who was competely fine.  We were being told that the power could be out at least a week, so my husband was on a mission to provide for what we needed.  Once I got him calmed down a bit, he told me his story of the day. 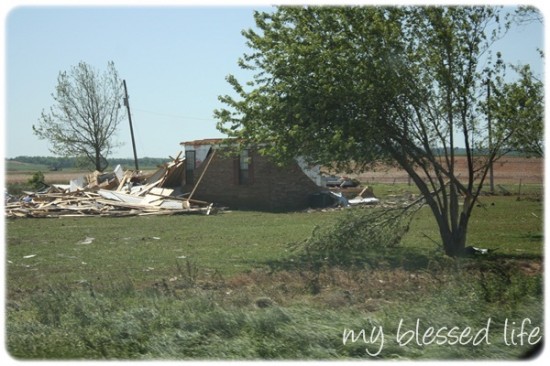 He and another co-worker had to leave the main plant area to go out to a smaller building to work on some kind of emergency power something-or-other.  He’s an engineer.  I can’t keep everything straight.  Anyway, they were told to head to the shelter, but when they opened the door to leave, the wind banged it open so hard that it almost came off the hinges.  Right outside the door the air was swirling.  The tornado {just declared by NOAA to be an EF-5 tornado} was less than 200 yards away.

They dove under a  table and I’m pretty sure there was some serious praying going on.  The building shook, but it stayed in place. As soon as it passed, they ran for the shelter. 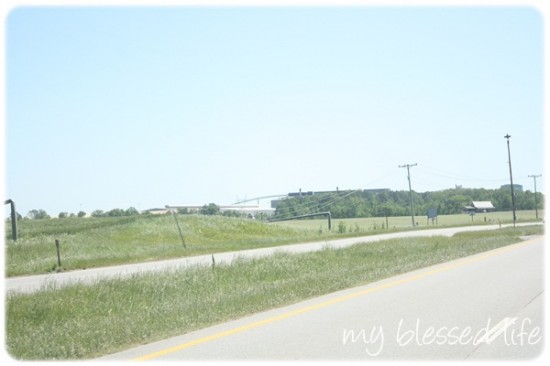 Needless to say, to hear that I could’ve lost my husband so easily shook me to my core. Once I saw the damage that this tornado did right beside his workplace, I was shaken again.

I’m so blessed and thankful that all of my family and church family are unharmed and their property undamaged.  We were without power from Wednesday afternoon until Sunday morning, but I didn’t complain for a second. We had our lives!  Never have I been so thankful for life.

On Thursday, Mom, Ridley and I spent two hours at Publix getting some survival groceries and then over an hour waiting in line for gas.  Thankfully the panic has subsided and recovery is in motion.

This week I’m digging out.  Digging out of my email inboxes, Facebook messages, Twitter mentions and everything else that piled up while I was offline. I have to confess that I rather enjoyed my mandatory vacation from my laptop, but I’m ready to get back to it…with a MASSIVE appreciation for life.  It’s such a gift.

Oh, and one of our next projects is cleaning out our landlady’s storm shelter.  It’s underground which makes me feel much safer.  I’ll be posting some severe weather prep tips and survival tips soon!

Thank you for your prayers, support and love!  I will be back posting normally asap!