You are here: Home / DIY Projects / A Window Mistreatment

I hope y’all are having a good week. I’m writing this in between bands of severe weather. The one thing I don’t like about Spring is severe weather. I love rain and thunderstorms, but tornadoes are so not my fave.

Anyway, I thought it was about time to show you how I came up with the window mistreatment {thank you Nester for coining the term!} in the newly remodeled bathroom. It’s so easy you won’t even believe it! 🙂 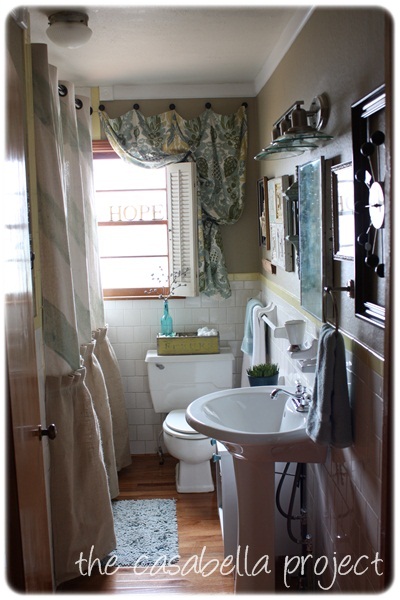 I had a crazy dilemma to deal with because the window is halfway in the shower. I frosted the glass with contact paper, and then added a set of shutters that I snagged at a yard sale for a few bucks. The window still needed some “softening.”  So I went fabric shopping and found the perfect fabric at my favorite local fabric shop – Willow Tree Fabrics!  I *lurve* – the gray blue, yellow and white are perfect! The green adds a fabulous pop too! 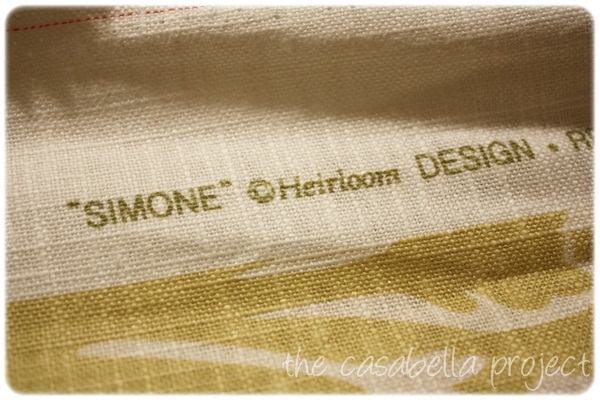 Since a pole wouldn’t work well because of the wacky window and the shower liner and curtain poles, I had to come up with a better solution.  Yay for the quirks of an old house. 🙂 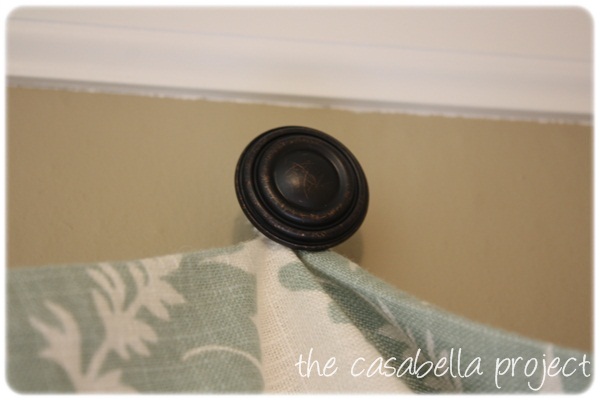 I went to Lowe’s and looked at knobby curtain hold backs, but #1 they were too big and #2 they were about $10 bucks a pop. Ahem.  I’m so not spending that much.  So, I came up with an unconventional plan B. 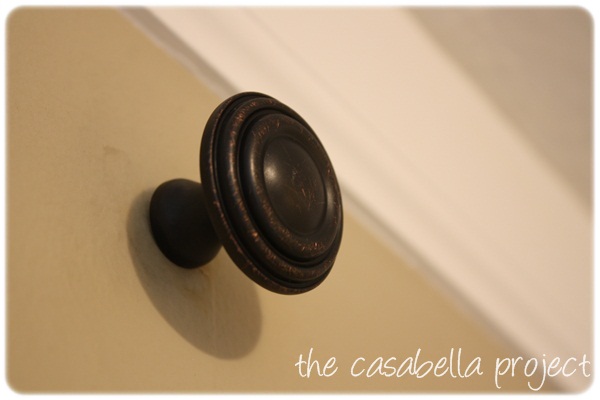 I decided on these 1 1/2″ cabinet knobs that I purchased on sale! {woot}  You’re probably thinking…”how in the world will cabinet knobs work?”

Well, my awesome hubs cut the heads off the screws that came with the knobs with needle-nosed pliers.  Then I made small holes in the wall where the knobs would go. I used liquid nails to attach the headless screws into the holes and I just left it alone overnight. The next morning, I jumped out of bed to see if my crazy idea worked.  It did!  I screwed the knobs on and all was well.

{I will say that the liquid nails doesn’t have the screws concreted into the wall, but they are secure enough to hold my curtain which isn’t heavy at all. I definitely wouldn’t want my 2 year old swinging from the curtain, but so far it’s working great!} 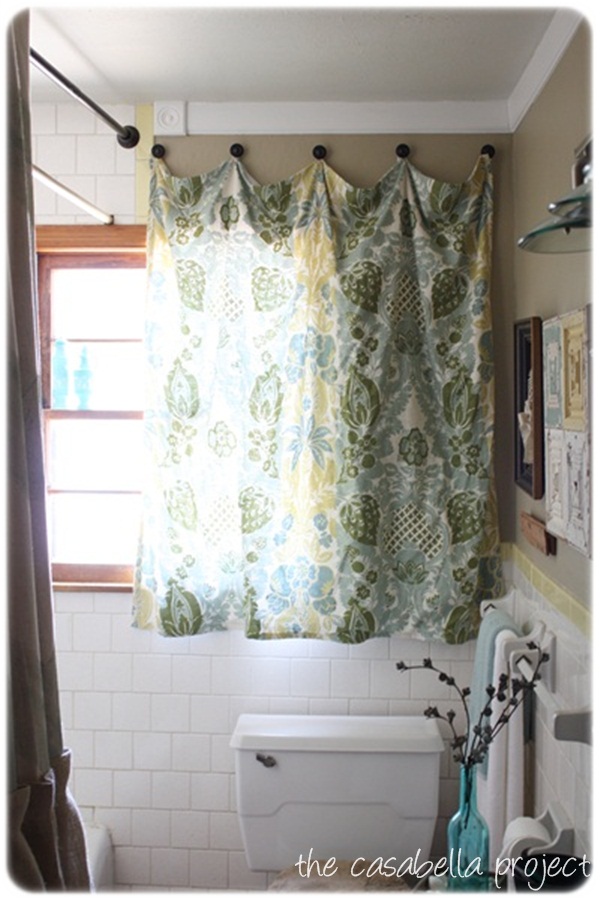 To make the curtain, I bought two yards of 54″ wide fabric.  You can see from the above picture that it’s just a simple square or rectangle.  I hide my perfectionism when it comes to treating my windows. I lined the fabric with a sheet that I picked up at a thrift store ages ago.

On the upper hem, I sewed the fabrics together with right sides together and then I folded the top fabric over about an inch.  Then I gave it a good crease with the iron. I didn’t want the lining to show at the top where the fabric swags a bit between the knobs. {does that make sense?} 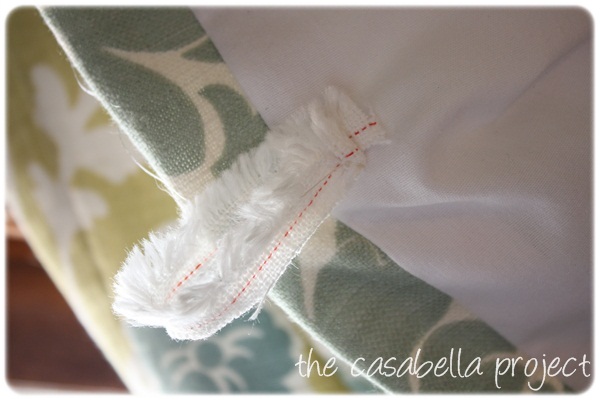 See how the decorative fabric is folded over?  I like how there’s no obvious seam at the top of the curtain.  I then hemmed the other three sides by just turning under, stitching and ironing…easy peasy.

I hot glued the loops on – perfecto! The key to not letting the loops show is to attach them to the curtain a little bit down from the edge.  If you attach them closer to the edge, you’ll want to use something prettier than a fabric scrap. 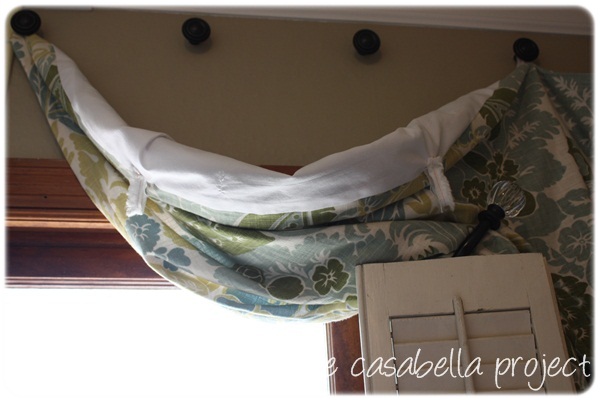 This picture gives you an idea of how everything works together.

Once the curtain looked like this, I purchased two holdbacks from Lowe’s to arrange the fabric to stay in place because I wanted to be able to open and close the shutters freely. 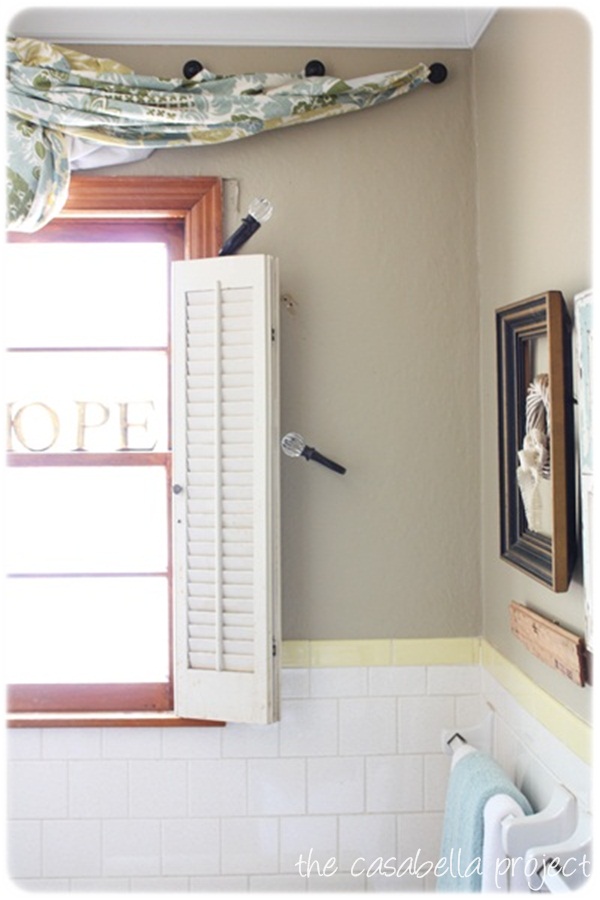 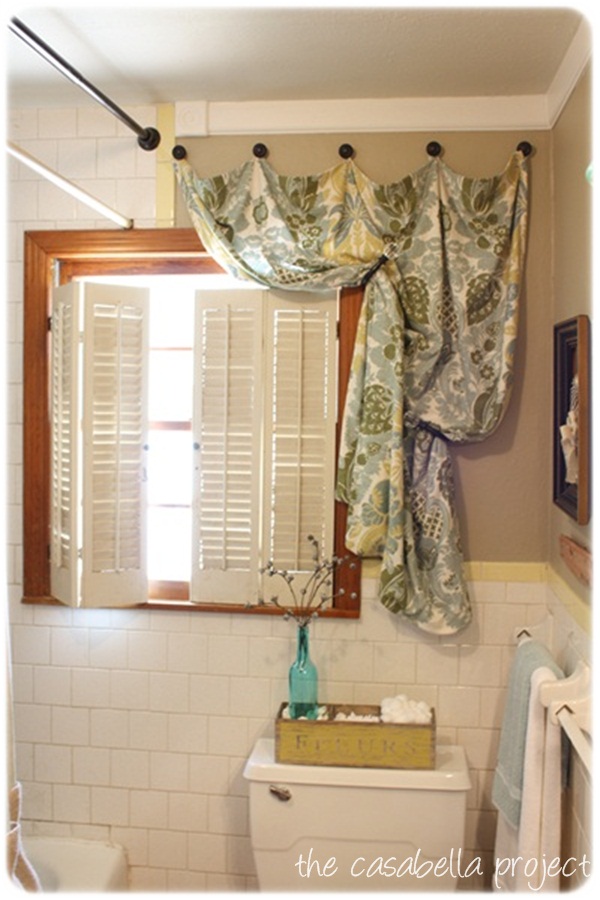 I love that it stays right where I want it!

Let’s dance for mistreatments! 🙂  Have you mistreated any of your windows?