You are here: Home / DIY Projects / How To Make A Shower Curtain {Chevron Style!}

Good morning y’all! 🙂  It’s been a crazy weekend full of running the car battery down and figuring out how to jump it off by myself {being instructed by my brother-in-law on the phone}, a broken laptop, an ER visit and all kinds of other excitement. I’m using my hubs’ laptop today, so hopefully I can get this post written and published.  *fingers crossed*

Let’s jump right in so I can show you how to make a Chevron Style Shower Curtain! 🙂 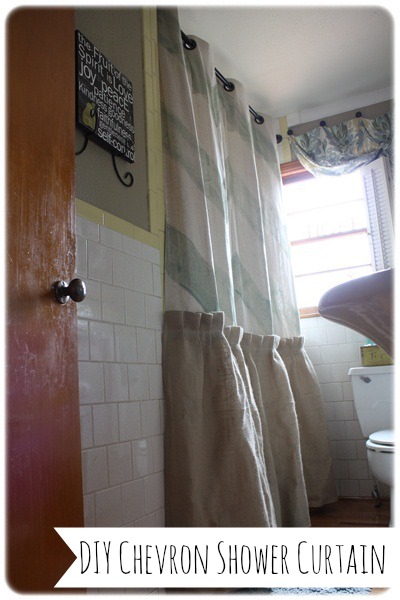 I made this shower curtain before we found that our guest bathroom needed to be demolished and remodeled.  That was at least two months ago.  Ahem. Now that the bathroom is finally pretty again, I’m pumped to show you how I made my $40 “custom made” shower curtain. 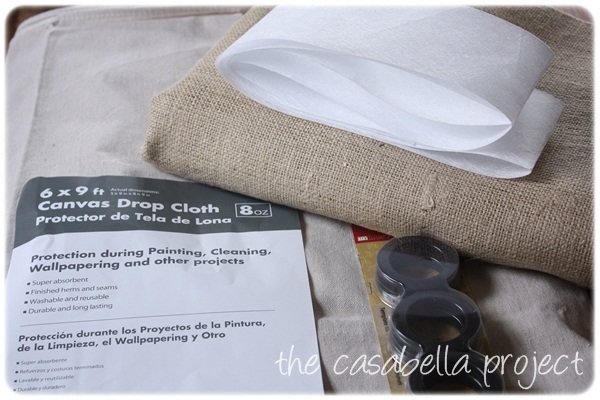 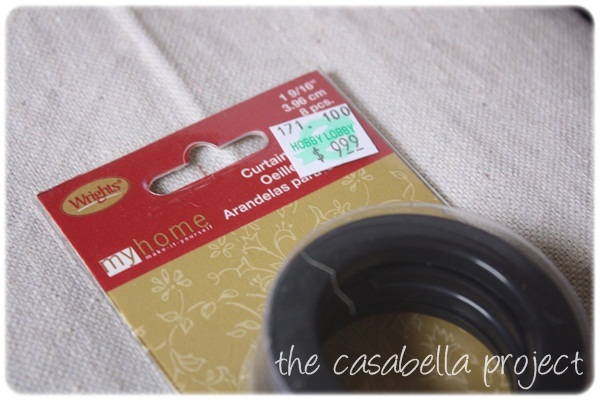 I found these grommets at Hobby Lobby.  With a 40% off coupon they weren’t pricey at all! 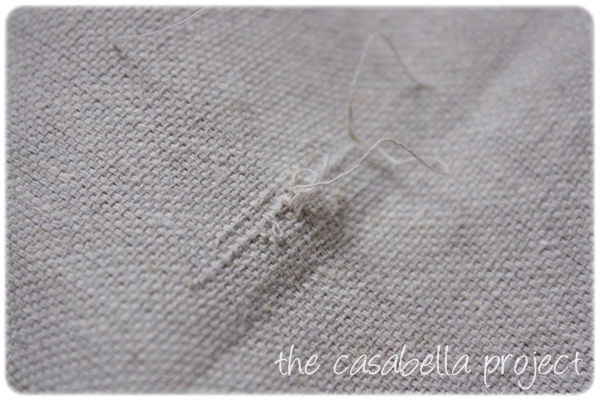 Embrace the imperfections in the dropcloth.  You’ll save yourself a lot of stress. 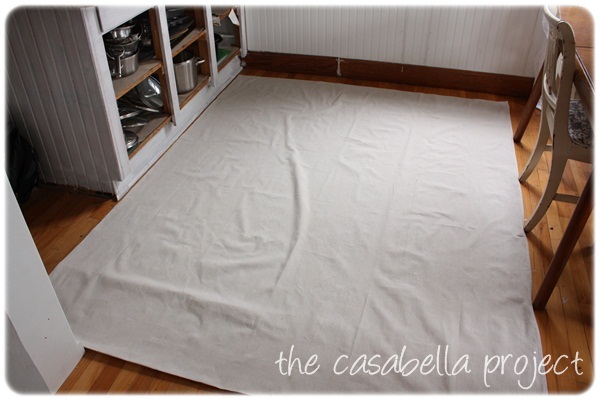 Lay out the dropcloth on the floor or on a massive work table if you have one.  For me the floor worked just fine. Except my knees might have been screaming when all was said and done.

The 6′ width is perfect for a standard shower curtain, but the 9′ was a bit tall for my bathroom with 8′ ceilings. I measured where I wanted the shower curtain pole to go and decided on the curtain length at that point. At one end I turned under several inches to be the header of the shower curtain where I would install grommets.  The other end I just left alone since it was already “hemmed.” 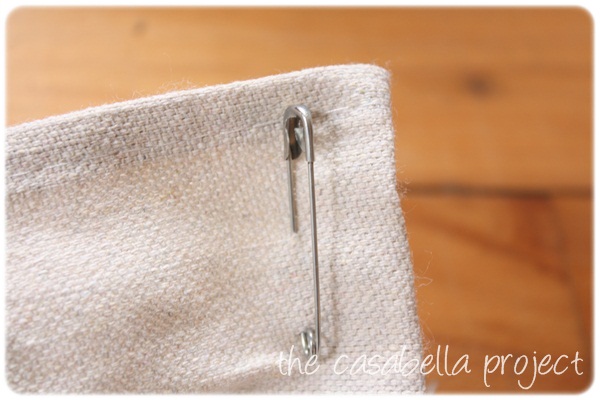 I safety pinned the end that I turned under for the header so it wouldn’t move around. 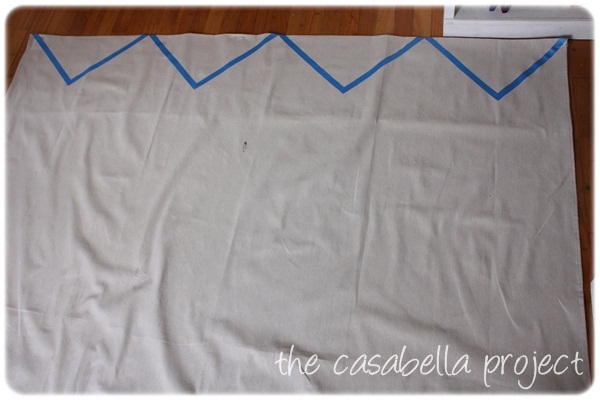 Then I began taping. Let’s just say that the first line wasn’t the easiest, but once I got the proportions figured out it went much faster. 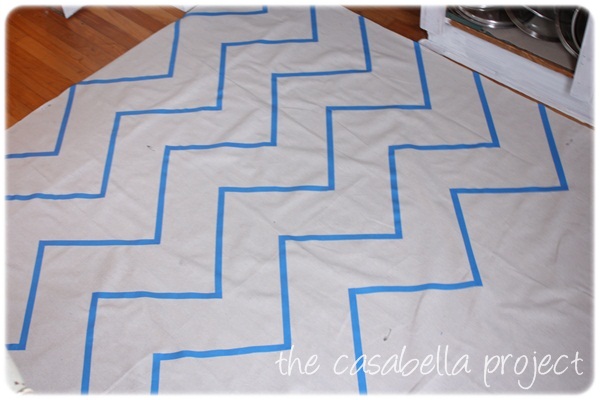 When the first line was done, I measured between the tape lines to make sure they were parallel. It wasn’t too bad, but it might have tried my patience just a teeny bit. 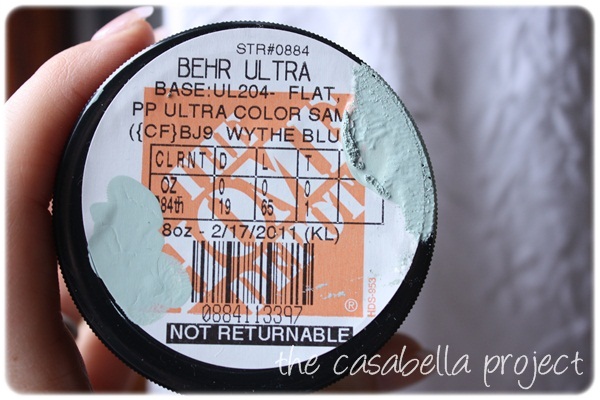 I pulled out a paint sample that I had from Home Depot.  It’s Benjamin Moore’s Wythe Blue {swoon}.  These samples are about $3, if I remember correctly.

And they’re “Not Returnable” in case you were wondering.  HAHA! 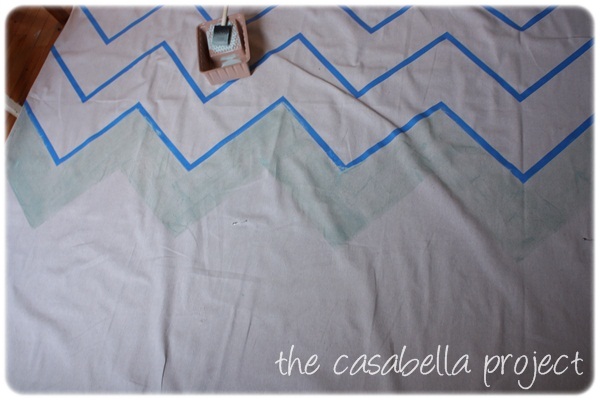 I used a foam brush, dabbed it in the paint and then brushed off most of the paint before I began “sponging” the paint on between the tape lines. I used a very imperfect dry brush technique. My intention wasn’t to be perfect, so everything went according to plan. 🙂  I totally started falling in love with my ginormous chevron pattern! 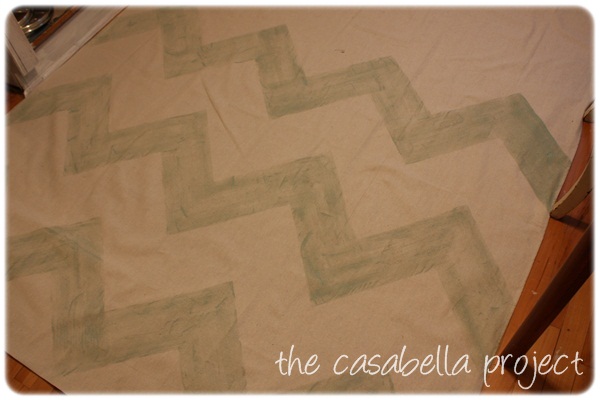 See what I mean about imperfect?  Yeah.  Thankfully it doesn’t look like a first grader painted it when it’s hanging up. 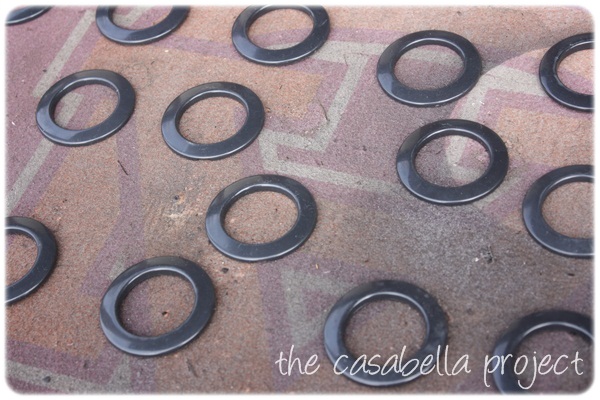 My shower curtain pole was bronze, but I wanted it to be oil rubbed bronze {ORB}, so I gave the pole a quick coat of Rustoleum spray paint.  Then I spray painted the black grommets to match!

Can I just say that I {heart} spray paint?? 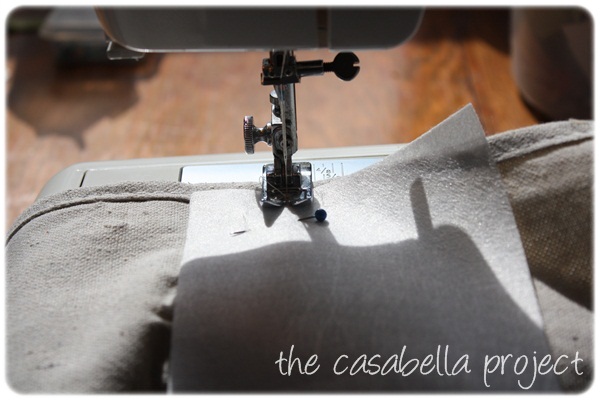 While the grommets were drying, I sewed the webbing/buckram stuff onto the header section that I turned under.  I used webbing to give more stiffness to the header. It worked like a charm! 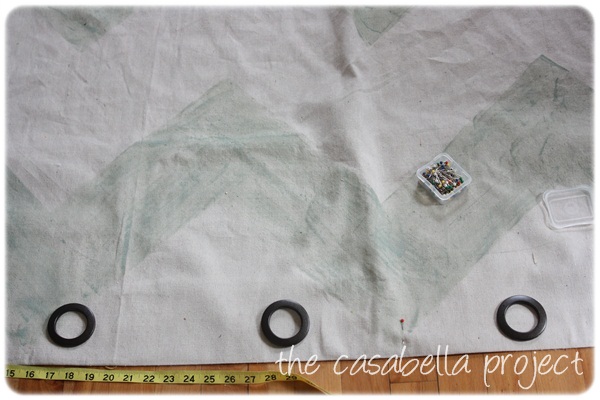 Then, I evenly spaced out the grommets. 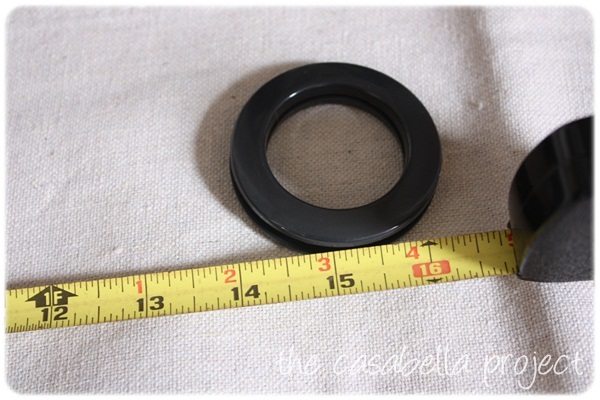 They were basically 15.25″ apart.  When I got them placed, I drew a circle around the inside edge.  Then I cut out the fabric inside the circle and installed the grommets.

I was very impressed with these grommets. In spite of my skepticism, they worked incredibly well. 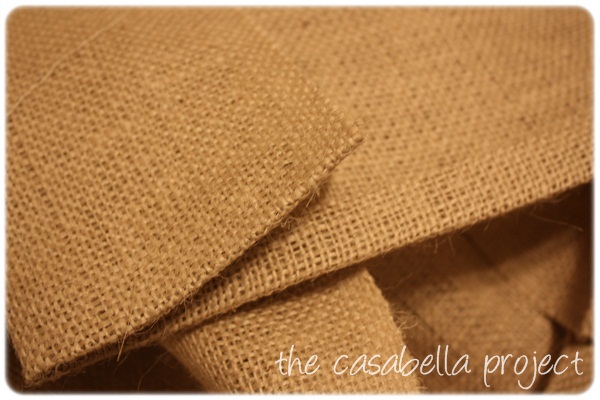 Now for the super fun part! The BURLAP! 🙂

I had three yards of burlap, and I used the entire length.  Since I ran the burlap horizontally, the hem was already a finished selvage, so I didn’t worry about hemming it.  Once I decided how “tall” I wanted to make the burlap “ruffle”, I turned under the sides, ironed and hemmed them. {My ruffle is about 30″}  Then I cut off the excess burlap off the top and turned down about three inches and gave it a good crease with the iron. 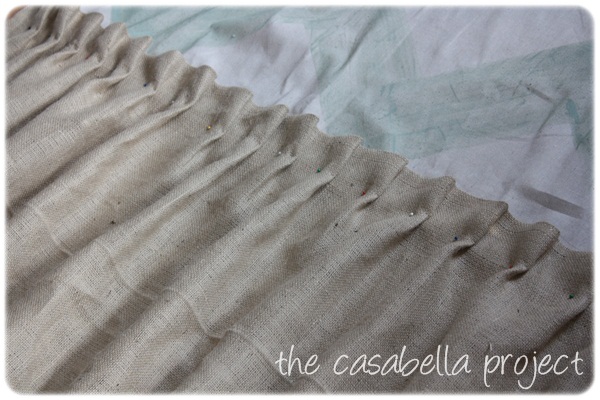 To get the pleats approximately equal, I pinned the sides and the middle first. Then I just pleated and pinned. I did have to adjust some along the way to make them more equal.  That’s just how it goes with pleating. 🙂 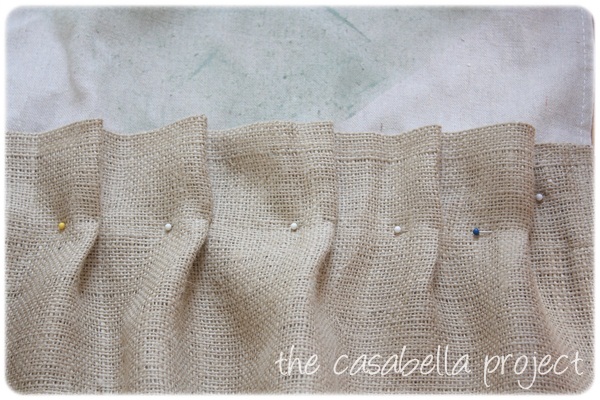 Once, the burlap was all pleated and pinned, I sewed it to the painted dropcloth. It is important to note at this point that I ran it through the sewing machine so that the foot wouldn’t get caught on the pleats. #brainteaser

I hung it up on my newly spray painted shower curtain pole for all to see.  I truly love the combination of two of my favorite things…burlap and chevron.  🙂

Check out more pictures of how it looks in our newly remodeled bathroom.

I hope y’all have a wonderful Monday…as wonderful as Mondays can be. 🙂

Linked to: Get Your Craft On and Tips & Tutorials Tuesday and How-To Party and Weekend Wrap Up Party and Before & After Party!